The Chrysler line in these years remained as large size cars. But Chrysler Corporation mistakenly thought the competition at Generic Motors was downsizing their 1962 Chevy line. Chrysler downsized the Dodge and Plymouth lines for 1962 as a result. The first B Body Mopars were the result.

Unfortunately for Chrysler, the rumored small Chevy turned out to be the Chevy II.

In retrospective, the B Body 1962 Dodge and Plymouths are perfectly proportioned vehicles, downsized years before the public was ready for them.

In 1962, however, Dodge and Plymouth sales fell, as the public wanted a bigger car that year. Responding, Dodge rushed out a 1962 Custom 880 model. The 880 was really a 1961 Dodge front clip mated to a 1962 Chrysler body. These are pretty scarce Mopars today. Plymouth had to wait until 1965 to get a stretched out car, the fabulous 1965 Fury.

The more I learn about these big brutes, the more I like them! I'll add more material as fast as possible.

Add your Mopar here! Send me a photo of your car and I'll add it to this section.

Some of these are links to other Web sites. If the page does not work it means that person has changed the address or pulled down the page. let me know and I'll delete the non-working link.

Though technically a Chrysler badge, we all know the 300 letter cars are very special Chryslers!

The non-letter Chrysler 300's were more of a trim than a performance package, but still awesome Mopars. 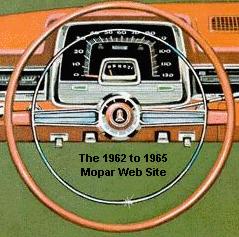 Want the opportunity to communicate with those who share your Mopar preferences?
Check out the 1962 - 1962 Mopar Mail List Clubhouse for more details.


Note: files noted with a [*] open up a new window on your monitor. To return here just close that window.