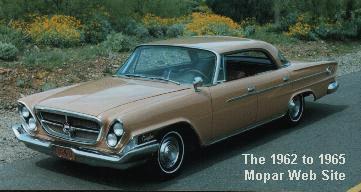 This car was manufactured December 12, 1961 and shipped to Bill Luke Chrysler in Phoenix, Arizona. It is equipped with a 383 2bbl., A/C, power steering, brakes and antenna.

The car was purchased in September 1962 by a couple living in one of the retirement communities near Phoenix. I have copies of all the registration records showing that I am the fifth owner. I also have a copy of an appraisal done by Craig Jackson (founder of the Barrett-Jackson auction) in 1983. He said the car was worth $3000.00 at that time. Some work has been done since then including exterior paint, seat fabric insert replacement and new carpet.

Some people may not be aware of the 300 Sport, most often referred to as a non-letter car. This model was the replacement for the Windsor, and was developed to trade on the good reputation of the letter cars, yet remain more affordable. The standard engine was the 383. The 361 went into Newports and the 300H had the 413.

[This car has the original 383.] My first reference is the car itself. The numbers on the boss behind the water pump show that the engine is a 383 (38, the 361 will be 36, the 413 will be 41) with a manufacture date of December 15 (12 15). The engine does have a Carter BBD Model 3244S as indicated that it should in the factory service manual that I hold in my hands at this moment. I also have copies of the documents transferring the vehicle from Chrysler to the dealer that sold the car here in Phoenix, showing that it was shipped in December of '61.

Included in my documentation are copies of all ownership registrations and many receipts for parts and repairs over the years. These papers show the mileage of just over 67,000 to be the actual mileage. The car is unrestored and looks like it should with that many miles on it. Therefore I have every reason to believe that it still is equipped as it came from the factory and has the original engine.

I also reference the Krause Publications Standard Catalog of Chrysler, which shows the engine for the '62 300 Sport to be the 383.

At the cruise-ins I get this comment quite a bit, as well the one about Chrysler never making any 4 door 300's.

I enjoy driving this car, putting approximately 2,000 miles a year on it. It draws a lot of attention at the cruise-ins. I also take it to shows and old car runs around the state.

This car is one of the great survivors, and I feel a strong sense of duty to preserve it for the future. 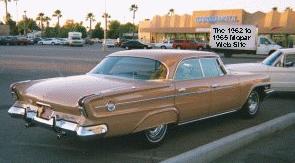 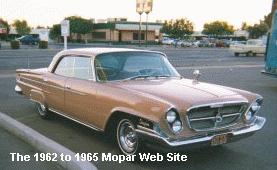 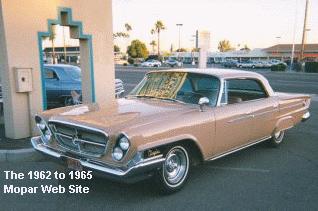 Indeed, 'one of the great survivors' sums it up nicely, Gary!

Thanks for sharing your Mopar with us!