Here are oil pan dimensions given in the Mopar Performance Chassis Book.

The following photographs depict the differences between the 187 oil pan and a pan with no stamped number which came out of a 1965 Dodge Coronet (361). I've done this in hopes to eliminate confusion during future engine swaps, and oil pan swaps. The bottom line is, the 187 pan does not fit in a stock '65 B-body. In the captions the 187 pan is referred to as 187 and the other is 1965 B-Body. 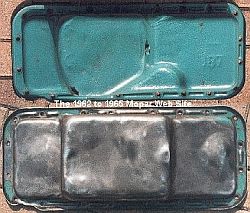 187 pan on the left, 1965 B-Body pan on the right. Note the differences in height both in the sump and at the rear.

Rear of the pans showing how shallower the 1965 B-Body pan is compared to the 187.

Front of the pans showing how shallow the 1965 B-Body pan is in front to clear the K-member, and also for that reason the sump is pushed back farther than on the 187. Note the chipped paint on the 187 pan where it touched the K-member (it touched on both sides). 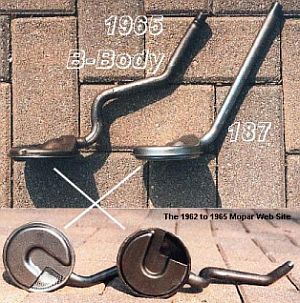 Pickups tubes. The 1965 B-Body tube is angled to clear the baffle in the pan. The 187 tube is longer and will not interchange with the 1965 B-body pan, even if part of the baffle is cut away.

Overall comparison of both pans, with 1965 B-Body pan in front.

Comparison of three big block Mopar oil pans:
The top pan is from a 1965 Plymouth Satellite;
The center pan is a #187 pan from a 1968 Plymouth Fury;
and the bottom picture is a #402 pan from a 1969 Charger.
(Click on the picture for a larger view.)
Thanks to Rob Lipinski for the above three pan comparison!


Rob Lipinski sends in pictures comparing four Mopar big block oil pans:
1  Ron adds:
"The pan we bought from Mancini we call the 'HEMI' pan should actually be called a deep, baffled 187 pan, as it has the notches for suspension like the 187."


Thanks again to Rob Lipinski for the above four pan comparison!


Note: The Mopar part number for a center sump pan was P5249063, which came with the pickup and dipstick. (May be discontinued.)
The pan only part number is 5007807. Thanks to George Smith, Wally Breer and Joe Huff for this info!

John writes: I think that everyone knows about oil pan issues for our cars. I purchased a Moroso 20760 pan for my 1965 Dodge Coronet 500 after being told by Summit that they were reworked to fit '62-'65 chassis. The notch at the back of the sump looked like it was going to do the trick. Anyway, after buttoning everything up, I found that the center link barely touched the bottom of the pan. I just finished modifying the center link by taking a piece of 1 inch mild steel rod, heating and bending the ends to conform to the original, and after prepping both pieces, mig welded the new piece to the bottom of the original. II kept the new piece 1 inch shorter per side than the distance between the pitman arm and idler arm holes. After tack welding, I cut out the original piece and finished the welds. Now I have 1 inch between the pan and center link, no binding, and most importantly, stock steering geometry. 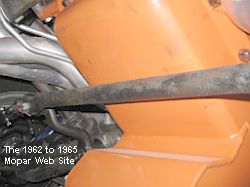 Nico writes: The Moroso 7 quart pan, part number 20760, is redesigned. It now is supposed to fit the 1962 - 1965 Mopar chassis. I have not used one myself so I can not give installation problems/fit etc.

NOTE: As of August 2008 that part Mopar Performance oil pan number was discontinued by Chrysler. Boo.

Sean writes. Apparently the oil pan is again now available as P5007807AB from Summit Racing. $151.95. [July 2009 prices cited] The full part number of the matching pickup tube is P5007848 for $24.95. (If Mancini Racing is cheaper, Summit will price match them.) This pan is top-notch, with a baffle on all sides of the sump. It comes with a magnetic drain plug, also.

“There is an oil pan available that has very good ground clearance (sump is just over 5 inches) and great capacity (7 quarts without filter). I put this pan on my street driven 1964 Plymouth Fury with a 440 and have been very happy with it. The oil pan is made by Milodon and is called a circle track pan part #31580. They offer 1/2 and 3/8 inch pickups for this pan also. The pan is expensive, Summit lists for $395, but I have seen it priced on line for $365. The peace of mind offered by this pan when driving around is worth it. I got very tired of the 7 inch deep sump on the pan I had before. Even with tall 15 inch front tires the pan still scraped many times. This circle track pan really helps the engine, If you like to enjoy the power these engines can offer when properly tuned, (and I do) then I highly recommend this oil pan. I really like these ’62 to ’65 Mopars. If you own one you owe it to the car to make sure it runs properly. These are the cars that put Mopar on the performance map. Hope this helps, Mopar to ya.” —  Mark Chancey

Thanks everyone for your help!