There is some confusion about the differences in Mopar transmissions from '63 to '64 to '65, and the corresponding problems with cables and valve bodies. I scanned in the text and photos from the 1964 Technical bulletin to Dodge dealerships, which details changes in the Torqueflite automatic from '63 to '64.

All 1964 model torqueflites, both for 6-cylinder and 8-cylinder engines, have a new internal oil filter. The oil screen assembly has been redesigned to contain a sheet of Dacron felt, over two layers of perforated steel. The filter assembly is installed on the transfer plate with three slotted head screws, in the same manner as the previous screen assembly. This change necessitated no change in the valve body or in the transfer plate. The new filter is thicker than the screen assembly it replaces, so a well is stamped in the oil pan to compensate for the increased thickness. The factory fill of oil, and the filter, should be good for the life of the vehicle in normal operation. In heavy duty operation at 32,OOO-mile intervals, and in extreme heavy duty operations at lO,OOO-mile intervals the fluid and the filter should be replaced.
Diagnosis - If the filter becomes clogged, the condition will first become evident in excessive delay in obtaining reverse drive. Some delay is normal when the oil is cold, but when the transmission is warmed up to normal operating temperature, there should be no noticeable delay in obtaining reverse. 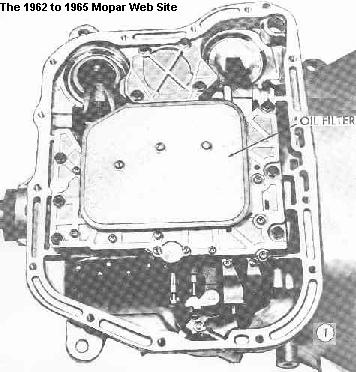 This filter will do a more thorough job of excluding particles from the transmission hydraulic circuits than the previous filter, because both the front and rear pumps draw through the filter, whereas only the oil passing through the torque con- verter was filtered by the "T" Series, external, filter. Elimination of the external filter also eliminates two potential leak points  -  the tubing connections at the filter.

All Chrysler, Dodge, and Plymouth Console Models, whether equipped with automatic or manual transmissions, have gearshift selector levers on the console. The A-727 torqueflite shift lever, in console models, extends through a fore-and-aft slot in the console and is spring loaded to the right against a series of gates. There are six selective positions, reading from rear to front - Low (1), Second (2), Drive (d), Neutral (N), Reverse (R), and Park (P). 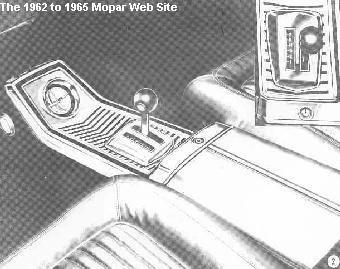 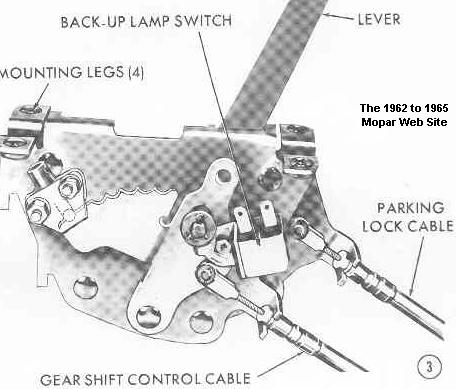 In addition to the gating provided along the top of the lever bracket, each of the six positions is detented. 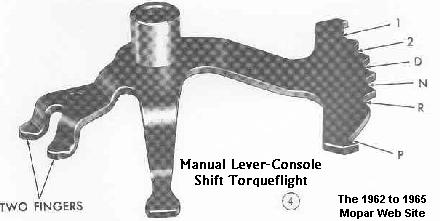 The back-up light switch is mounted on the cable operating lever and is actuated by a hump on the side plate when the shift lever is moved into reverse.

The valve body is modified, mostly in the area of the manualvalve and the manual valve operating lever. The valve, and its pressure passages in the valve body, has been modified to provide for the sixth (Park) selection. The manual valve operating lever has six rather than five detents in its "Rooster Comb". It also has two "Fingers" so that the neutral safety switch is grounded in either "Neutral" or "Park" position. 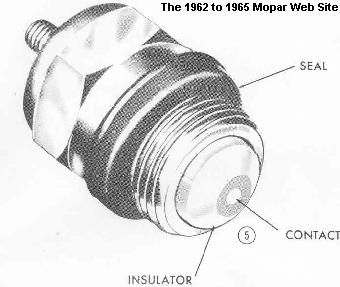 The neutral safety switch in Console A-727 TorqueFlites is in the same location as in other TorqueFlites, but is of a new design. It has a larger spring loaded nylon insulator plug with a pin-like metal contact in its center. The manual valve operating lever must be precisely in Neutral or Park position before the starter circuit can be energized. As a matter of fact, difficulty can be encountered when reinstalling a valve body in getting it aligned with the switch. Before tightening the ten valve body retaining bolts, check to make sure that a "Finger" of the manual valve lever centers on the switch contact in "Neutral" or "Park". The switch seal is a special design, unlike the cupped washer and O-ring seal used on other models. This is a one-piece seal, consisting of a cupped aluminum washer entirely coated with Butyl rubber. 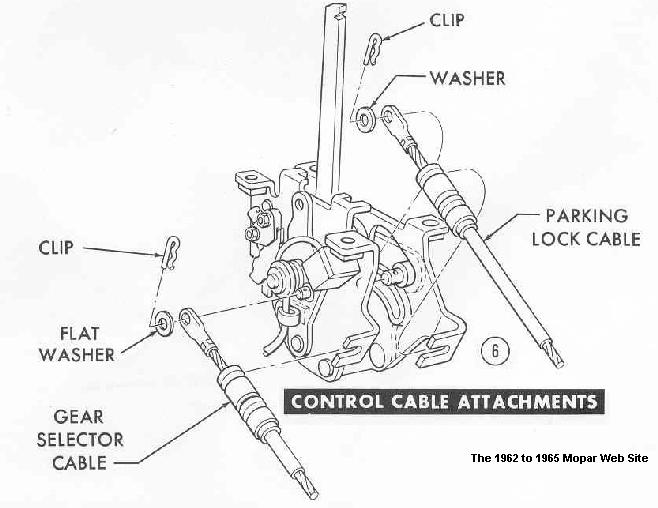 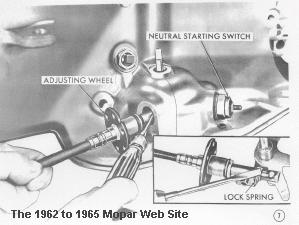 The gear selector cable is attached to the selector lever in much the same manner as with a push button box, with a cable eye over a pin, secured by a flat washer and spring clip.

The removal and installation procedures for the gear selector cable at the transmission are the same as those followed with push button cables, but the adjustment procedure is different. To make this adjustment, proceed as follows:
1. Have an assistant hold the selector lever firmly in the "1" (Low) position.
2. Hold the control cable centered in its bore in the transmission case, and pull outward on the cable with about two pounds of force to bottom the manual lever in the "Low" detent.
3. While maintaining this pull on the cable, rotate the adjustment wheel clockwise until it just contacts the case squarely. 4. Turn the wheel counterclockwise just enough to make the nearest hole in the wheel line up with the screw hole in the case.
5. Counting this hole as number one, continue turning the wheel counterclockwise until the fifth hole lines up with the screw hole in the case.
6. Push the cable in toward the transmission until the adjustment wheel is tight against the case and install the lock screw, tightening to 75 inch-pounds torque. 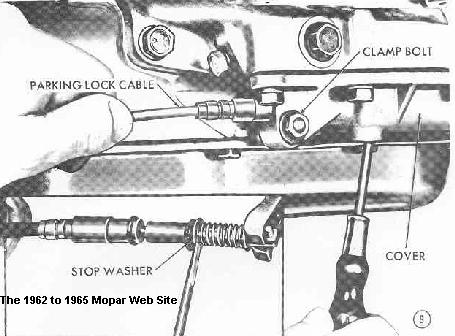 To make this adjustment, proceed as follows:

1. Place the selector lever in "Reverse" position, and loosen the cam jam nut on the pivot.
2. While sighting through the opening in the left plate of the shift mechanism housing, rotate the cammed pivot until the scribed line on the gear selector cable control lever bisects the parking lock lever guide pin.
3. Hold the cammed pivot in this position and tighten the jam nut to 95 inch-pounds. 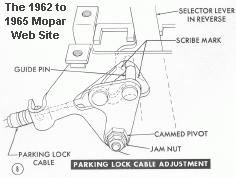 PARKING LOCK CABLE (TRANSMISSION END)
The procedures for parking lock cable removal, installation, and adjustment at the transmission end are the same as for conventional TorqueFlites. [See the notes and the 1964 Service Bulletin link at bottom of this page.] 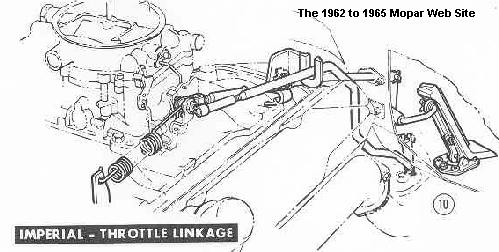 Adapters and cables are not interchangeable between push button and console models. In console torqueflites, the cable adapter contains a small overtravel spring and cup. Also, the lock spring groove in the cable end is wider than on push button cables. The overtravel provision in console transmissions had to be made to accept the reverse-to-park travel of the cable after the manual valve is bottomed. The presence of the spring accounts for the change in shift cable adjustment at the transmission. 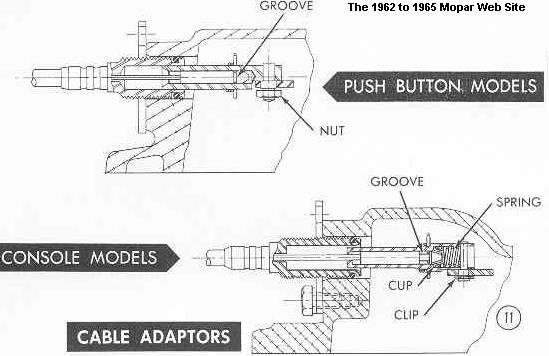 Thanks to Buck for the information!

Now make a long "jumper" wire from a piece of wire in the 14 to 18 gauge range, and attach a male spade terminal to one end on the wire. Plug that spade terminal into the end of the brown wire that was attached to the starter relay. Hook up an "ice pick" type test light to the end of that same brown, neutral switch wire that is dangling under the car. That is the end you removed from the neutral switch. Now the jumper wire you made, attach to the positive cable on the battery.

Next,get under the car and remove the 7/16" head cap screw that is holding down the wheel adjuster on the transmission shift cable. Loosen the wheel by turning counter clockwise, until it is almost off the end of the cable.

Now with the test light pointer (ice pick type end) in one hand touch it to the threaded post on the neutral switch, while pulling, and pushing the cable in and out of the transmission case. When you are in the neutral position on the detent, the test light will light up, confirming you are in neutral. Once the light is in a position where the light remains on, rotate the adjusting wheel on the shift cable clockwise until it is against the transmission case. Now you may have to fine tune your adjustment. Usually by turning the adjuster left or right by 1 or 2 holes.

If it is not fine-tuned you end up with an adjustment where you have to push in on the neutral button slightly.

The method the factory uses in a service manual never worked for me, so I came up with this method. Give it a try. You can not mess up unless you ground out the hot end of that wire while it is attached to the battery.

After you are satisified with your adjustment, remove the jumper wire, re-install the neutral switch wire, and re-install the small cap screw in the adjuster wheel.

Use an ohmmeter like the test light method: “The ohmmeter gives a resistance reading between it’s two probes. If the probes touch it is zero resistance. When you touch the probes to another pathway it tells if there is a high or low pathway. The Neutral Safety Switch (NSS) completes a circuit by supplying a ground in this case. The terminal on the NSS will show no pathway until it is engaged. If the ohmmeter shows low resistance between the terminal and the case then it is engaged. Just like using a test light but no outside power required, as the meter has a battery of it’s own.” —Rich K. (March 2014)

The absolute best way to adjust the buttons is to remove the pan and adjust N for perfect central contact on the neutral saftey switch. Kickdwn linkage. Make sure when throttle is wide open, kickdown linkage is all the way back as well. That is all there is to it. Works perfect. — Schuyler W.

The original adjustment procedure seems a little nutty when you’re standing there looking at the valve body, but it takes this lost motion into account. — Steve C.

1962-1964 pushbutton 727 TorqueFlites are the same. The 1965 727 TorqueFlite can be used with pushbutton with a minor valve body/cable modification. The main difference you have to check is the bell housing bolt pattern. Big block B/RB and small block A/LA engines are different. For example, if the engine is the right group the 1964 Fury 727 will work in a 1962. Both will have the 19 spline shaft using the same converter.

Note: Do not discard any pushbutton valve bodies! They are getting hard to find and many shops do not have exchange units. — Nick T.

I like removing the upper bellhousing bolts while the car is still sitting on the tires. If you have a remote starter switch that you can use to hook up to the starter relay, now’'s the time to do that too. Removing the oil filter on a small block motor makes it easier to remove one of the bellhousing bolts.

Removing the shift and park cables is the only trick issue. Parking cable: loosen the lockdown, and pull the cable out until it stops clicking when the output shaft is turned. Retighten the lock nut. — Jimmy P.

Be Careful! Danger! You risk severe injury or death doing mechanical repairs on your 1962 to 1965 Mopar. Don't take rash chances and don't shy away from careful use of jack stands, spring compressors, eye protection and other safety devices. Get a qualified professional technician to do the work if you are at all unclear about the repair procedures, or if you do not have adequate tools or safety equipment.