The many faces of LeRoar, — or the life of a test mule 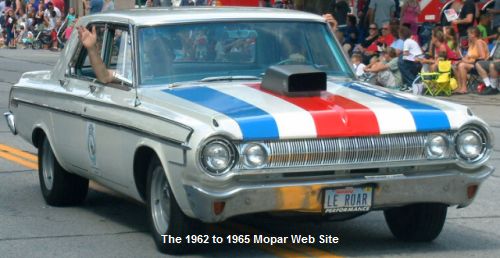 I had always built engines on the slightly upper end of practical but never pushed the limits. I felt that it was time to be a bit crazy and not worry about practical. I have lost count of how many times I have pulled the engine out of this Dodge over the years, but it has been a frequent activity. Many times it has been a semi-party event with my 1962 to 1965 Mopar Mail List friends, among others. I built the bottom end as a base for the future configurations. My changes where primarily with camshaft and fuel delivery systems. The original internals still remain but even they have been tweaked a bit. My crank was good and has been zero/zero always. I have replaced the bearings a couple times due to a few water issues and, of course, rechecked the crank at those times. The pistons were .040 over custom forged aluminum by Ross and after one major water issue where a ported head was a bit too ported. I had the pistons ceramic/moly coated. I highly recommend this! I figured I should do everything possible to keep the engine cool so from day one there was a FlowKool water pump and I later added an aluminum radiator, handmade stainless steel fan shroud, B&M trans cooler and a Milodon #16406 high flow 180 degree thermostat. I have always used the stock oil pump. I chose Eagle SIR6123CB rods as they were stronger and lighter than stock and very close to the same price as reconditioning stock. A no-brainer in my opinion. Of course, the engine was balanced and I had a Powerforce harmonic balancer and a JW Performance XHD SFI flex plate. TTI headers, Super Dyno-Max mufflers, Mopar electronic ignition, Cloyes double roller adjust a hex chain, Mopar windage tray, Fel-Pro gaskets and a Summit #SUM-820337 mini-Starter with a heat shield blanket are used. I did install a 1970 GTX 489 rear with 3:90 SureGrip gears and had the transmisin built with a Trans-Go kit and used a Engine Dynamics 3000 stall converter. An extra leaf was added to the rear springs and heavier torsion bars were used. I rebuilt the front end with poly/graphite bushings and added manual disc brakes.

After a few years with the original setup I decided to push it further and I purchased a Schneider 284deg/.510" lift, 242deg@.050" solid lifter cam. I also got a set of highly ported heads with 1.94 intake and 1.675 exhaust. One head turned out to be an issue as it was ported a bit too much on one cylinder and turned LeRoar into a Stanley Steamer. The head was replaced and that was the point where I had the engine inspected, installed new bearings, lightly honed the cylinders and had the pistons coated. A few oiling modifictions were done at that time, which included a few extra holes in the oil filter plate, additional oil holes in the crank and a plate over the holes above the camshaft below the intake. The plate was to prevent oil splash on the bottom of the intake for temperature control. When this combo hit the track it was awesome right out of the box! The Poly loved rpm's and 7200-7500 was my shift point area. The 264 cam was about 6500 rpm's. I only got a few runs on this set-up, unfortunately, as it was too much for the transmission and busted the rear tailshaft housing. The 264 cam had a best in the 1/8th mile of 9.75 seconds. The 284 cam ran 9.15 seconds without any carburetor tuning. The Mopar was also much more streetable and did not overheat at all. I actually swapped in a stock 195 degree thermostat to warm up the engine more. This was the prime set-up for the dual-quads in my opinion. I wish I had been able to work on it awhile as I am positive it would have gotten into the 8's.

So the bottom line is that I have been only concerned with the drivetrain and particularly the engine up to this point. Now I will finally shift my focus to the interior and body. I doubt that the body will ever get done but I need to do the interior for better comfort. A/C would be nice but again I can live without it. I have been lucky to have found the 1962 to 1965 Mopar Mail List and the 318 Poly Yahoo group who have been so supportive and helpful with my efforts. It has been an old teenager's dream to get his car shown in the media. Wild About Cars (May 2012), Street Legal TV digital magazine ( September 2012) and Chrysler Power Magazine (May 2016) have made my day. I even run across the old picture of my poly in mock-up mode in my basement on quite a few places on the Internet. LeRoar was also shown on Street Legal TV magazine again when they did an article on What is a sleeper? and the Polara spent a winter on display at the SAC Air and Space Museum in Ashland, NE.

It has been fun and I am ready for more.

Read more and see additional photos of this Polara: Part One and Part Two