How to search this page

While holding down the CTRL (control) key on the keyboard, press the F keyboard key. Then type in the term you are looking for in the search box that appears in your web browser.
There are up and down arrows in the search box to use to search for additional instances of the term. (MS Windows)

One great benefit of the emerging World Wide Web is the creation of the ability to quickly and easily share knowledge and information.

In the Mopar cyberspace arena there are many people who have developed web sites to share their Mopar passion! There is much sage advice available providing technical lessons on how to keep these Mopars on the road in one form or another.

Let us know if you have the address of a good technical site to share with others.

Here are some preliminary links to other web sites wrenched by Mopar fans: 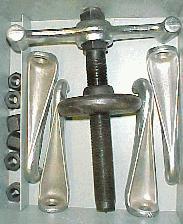 Pulling tapered axles
Note from Paul L. -- “When using the puller on the rear drums, remove the castle nut and then reinstall it backwards and thread it on just far enough so that it is flush with the end of the axle. This will ensure that the end of the axle does not get flared out from the pressure you are going to put on it. Use a fist maul or a sledge hammer to tighten the center screw on the puller. When it seems like it is good and tight against the axle use the hammer to give it a good whack on the end of the puller’s center screw. A lot of times you will hear a pop and find that the hub has popped loose. If it does not work the first time, rinse lather and repeat!” Brian S. adds: “One way to prevent the axle thread from mushrooming is to remove the castle nut and reinstall it backwards. Leave the flat side of the nut even with the end of the axle to prevent thread damage.”  Gary H. adds: “Put a very tiny amount of anti-seize on the axle where the drum makes contact. It will make removal next time less troublesome.“ Plymouth Club Tech: “How to remove a rear brake drum and hub” CJ3B Jeep Reference

Don has lots of good engine building tips given with the average Mopar fan in mind: that is, having wallet's with money restrictions installed. For example,
building a Mopar 460 from a 400 block,
an affordable 383
a reliable 440 race motor, (see the "Books" section of the References Page);
and more.

How to tech articles, book reviews, specification numbers and project examples. Much of the basic B-body mechanicals remained similar throughout that platform's production run. Many mechanical parts also swap across the other Mopar body platform styles, i.e., A-Body, C-Body. Here are some pointers.


NOTE: This section is continually in progress, like most restoration work!

(Thanks to MO, Jimmy, John, Darwin)


How To Rebuild a Vacuum Heater Control Switch by Herb, based on the above Wally Breer articles.

Brian Schlump reports a “quick and dirty way” to determine the 90 degree rotation for setting the valves on V8 engines:


Templates indicating the location for installing a side mirror on your Mopar!

My side view mirror on my 1964 Dodge 440, that is, the mirror part, was as loose as a goose. To tighten it, I took the mirror off, took the snap ring, mirror, and spring off, wrapped a rag around the base and put it in a vise. Then, taking a small ball hammer, I tapped on each end of the flat metal piece that covers the shaft. By tapping on each end it tightens the metal piece on the shaft. Hope this helps you out.... Butch. Thanks Butch!
Akron Don writes: To tighten the loose side mirror on the door, in the November, 2010 edition of Auto Restorer magazine had a guy who used red Loctite thread sealer in the pivot area, worked the mirror around and consequently the mirror will tighten up. However, it will still move after the Loctite dries so you can adjust the mirror as needed. The author claimed it lasted two years before he had to apply Loctite again.   See more mirror repair tips.

He also reported that a Wix filter 58964 (a magnetic in line transmission filter) can be used as a substitute.

Well, I tracked each of those part numbers, but couldn't get my hands on any of them. So I decided since I'm going to be using this car as a daily driver and not a show car, that practicality is what counts. I went to my friendly NAPA store and looked at the parts catalogue under aftermarket filters.

I came up with part number 4755 miscellaneous filter base and part number 1320 oil filter. I then bought two Edelmann number 122520 brass elbow fittings to fit the inlet and outlet ports on the filter base, a couple lengths of 5/16 inch flexible brake line, a couple 5/16 inch brass unions and three 5/16 inch bolts, washers and nuts to mount the base.

I mounted the filter on the passenger side inner fender well, as far front as it would fit. I cut the cooler line on the passenger side coming out of the radiator, made a new section of cooler line turning 90 degrees and up to the inlet port of the base. Then another new section of line coming out the outlet port and back down to the existing original line that was cut. I double flared both ends and joined them with a union.

The transmission filter works like a champ! Maybe someone else will benefit from my solution."

Do you know of any Mopar enthusiast who has posted technical data that would help owners of 1962 to 1965 Mopars?
Send the link to the address on the site's Homepage and it will get added here for others to share.
Be Careful! Danger! You risk severe injury or death doing mechanical repairs on your 1962 to 1965 Mopar. Don't take rash chances and don't shy away from careful use of jack stands, spring compressors, eye protection and other safety devices. Get a qualified professional technician to do the work if you are at all unclear about the repair procedures, or if you do not have adequate tools or safety equipment.

Please send suggestions for additions to future versions. Thanks.