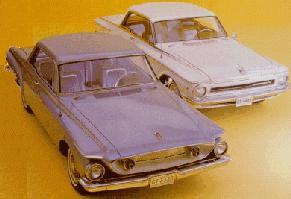 Mildly restyled '62 Dodge and Plymouth hardtop coupes...served as Chrysler's 'third generation' turbine specials. Two of each were built. One Dodge ran coast to coast, getting 17 mpg. It accelerated from 0-60 mph in a quick 7.8 seconds.
Source: Chrysler Chronicle by James M. Flammang and the Auto Editors of Consumer Guide, Publications International, Ltd., copyright 1995, page 186.

Press releases about the turbines

There are Chrysler Turbines in museums, so if you get a chance, go check one out:

2) The Petersen Automotive Museum, Los Angeles, which also has on display one of the 50 1963 Turbine Cars made.

Or 3) watch the movie The Lively Set which has a turbine Mopar in a race scene.