Building a 318 Polyhead Motor — LA and A Parts Interchange

A lot of parts interchange between the 1962 to 1966 polyspherical A 318 engine and the LA series of Mopar motors (318, 273, 340, 360), including:
Though reported as interchangable in several references, apparently the timing covers are not exactly the same.

Two pictures show the difference between a poly 318 timing cover and a small block LA cover. The one shown on the right is the poly 318. Notice it has one bolt hole that the other does not, exactly opposite the fuel pump opening. The LA does not have that, and neither do the gaskets that claim to fit all 318's, (poly and LA).

Gary Pavlovich writes: The missing bolt hole in the LA cover is not a problem for the Poly block as that hole in the Poly block is easily plugged. When I finished up a 402 inch stroker engine I confirmed that we hit water from that odd hole, so we plugged the hole and all was fine.

The only problem on Poly to LA timing cover interchange is with the early 1956 to 1961 Poly blocks that use the cast iron timing cover exclusively and have a unique water pump to those years.

UPDATE: Herb notes that a Poly bellhousing will not only bolt to a 360 it will also bolt to the Gen III HEMI Mopar engines.

Update: Tip on installing poly valve cover gaskets: “Fel Pro still makes valve cover gaskets for the Poly 318 Mopar engine (PN Fel Pro VS11828 R ). I put some black liquid Aviation sealer on the gasket. I think how you tighten it is significant too. I snug up the bolts hand tight and then push the valve cover up and to the front as far as possible before I finish tightening it. That seems to help. The valve cover moves quite a bit when doing this.” — Rich K.

Rich K. writes: “I took some pictures of the Poly 318 water pump with notations on bolt sizes. Note that the upper alt bracket bolt only attaches to the pump itself and can be fairly short. The lower alt bracket bolt is into the water jacket and must be sealed as with the corresponding bolt on the otherside. It does not hurt to put sealant on them all if you wish. I would be prone to lean towards the long side on the bolts as there is room for them to enter the block without bottoming unless you really get carried away. All bolts are 3/8 inch X16 (3/8NC). The power steering bracket is a through bolt/nut only attached to the pump as with the upper alt bracket bolt. 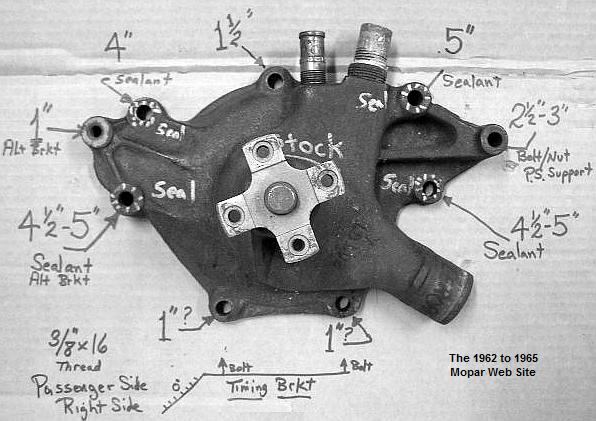 I would buy 3 each 5 inch, 1 each 4 inch, 1 each 3 inch, 1 each 1&1/2 inch and 3 each 1 inch. You will also want a 3/8NC nut and washers for the bolts. I buy grade 8 for everything. Actually the bottom short bolts could probably be a bit longer than 1 inch. I did not have a spare front cover to check it with. Notice the location for the timing tab too. It uses those lower short bolts. This is with my 1964 Dodge Polara. This water pump was the stock unit.”

Be Careful! Danger! You risk severe injury or death doing mechanical repairs on your 1962 to 1965 Mopar. Don't take rash chances and don't shy away from careful use of jack stands, spring compressors, eye protection and other safety devices. Get a qualified professional technician to do the work if you are at all unclear about the repair procedures, or if you do not have adequate tools or safety equipment.