September 2011 Mopar of the Month

I purchased this Plymouth Fury in Arizona from the Mopar’s original owner. The Fury had been a every day driver until it was parked in 2000. The Plymouth was in pretty rough shape, but it was rust free. So the Fury was completely disassembled and carefully put back together with dependability and comfort in mind.

First item was the car’s suspension. The rear leaf springs were moved inwards allowing for the 19X10 inch wheels and tires to tuck into the fender well. The rear end housing and axles were shortened 3 inches on each side and spring perches altered to allow the Mopar to sit three inches lower in the rear. For the front suspension custom two inch drop spindles were installed, as well as a sway bar and disk brakes added. On the front 18X8 inch wheels and tires were added.

The Plymouth’s interior was all custom made to resemble the factory interior, but with a custom touch. The door panels remained stock, but were dyed to match the new seats. The interior had over $2000 in sound deadening material added to the floor, trunk and doors. The instrument cluster was rebuilt adding a tachometer and white-faced gauges. The dash was smoothed removing the front speaker cover and padded dash. The old factory air was removed and replaced with a Vintage Air Max Flow unit. Of course, a 1000 watt stereo was added for some cruising tones. 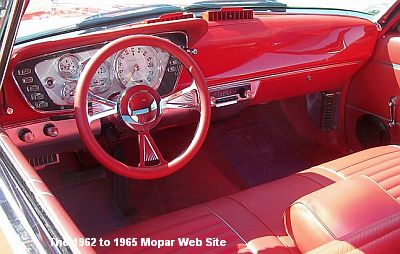 This Web page was completed in 2010. The 1963 Plymouth Fury featured here was later sold to a Mopar collector in New York.

This great Plymouth is a real head turner and a fun ride!