NOTE as of October 2011 this Dodge is FOR SALE. Here is the advertisement:

1963 DODGE POLARA 2 DOOR HARDTOP for sale. No expense spared restoration done on mint body from 2003 to 2007. Repainted the original CC1 Light Blue, most interior is original with exception to the seat covers and carpet. Anything that was replaced on this car was NOS or top quality reproduction. Headliner is original as are the exposed chrome bows. The only non-stock items in the interior are the Classic Instruments Vintage Series gauges (tach, volt, temp, oil pressure). The amount of detail that went into this car goes right down to the pool cue pointers in the gauges painted to match the exterior CC1 Light Blue exterior. Bumpers were rechromed and trim was all polished to mirror like finish. Tough to find brightwork like on this car. Originally a 383 big block car but now upgraded with a 472cid Hemi. 1968 Hemi Charger crossmember used to mate up the Hemi and SSBC front disc brake set up installed to help slow this beast from high speeds. All suspension and brake components were replaced as well. Cars rides tight with no rattles. Demon 850 cfm 4 bbl carb., tuned to run perfectly. Idles at 650 rpm, does not load up, no choke but starts cold with 1 pump of the pedal. Indy single plane intake massaged by John Arruzza. Aftermarket cam, lifters and pushrods installed by Booth Aarons, now 550hp and torque. Coan built 727 with the original push-button shifter still in place. The exhaust is through Hooker 2 1/8 inch primary tube ceramic coated headers into 3.5 inch collectors into 3 inch Manderel bent x-piped exhaust that was also ceramic coated right back to the tailpipes. Custom fabricated sub frame connectors installed to stop flex and improve ride. Flowmaster mufflers are ceramic coated as well. Original 8 3/4 inch differential in place with 3.55 gears and new Auburn Sure Grip unit installed. Wheels are 15 inch Mopar units, fronts are 7 inch wide with Goodyear 235/70/15, rears are 9" wide with Goodyear 275/60/15. Mopar Action feature car in December 2009 (Rhapsody in Blue). This car places in most shows it is entered in. Selected by former Ramcharger Mike Buckel as Best of Show in 2008 at the Calisle All Chrysler Nationals. In 2010 it won the Classic Instruments NSRA Pro’s Pick at the NSRA Northeast Nationals. The car is a stunning piece that has everyone amazed when they see that it is driven. 7,000 miles have been turned on the odometer since having purchased this carin May 2008. Own a unique piece of history from the era of the factory Super Stockers. This car will not disappoint. Well over $140,000 invested. 100’s of pictures available if you want to see something in more detail that the pictures here do not show, please email at the Contact Steve address at the bottom of the page, (no photo collectors please!)

September 2008 Mopar of the Month 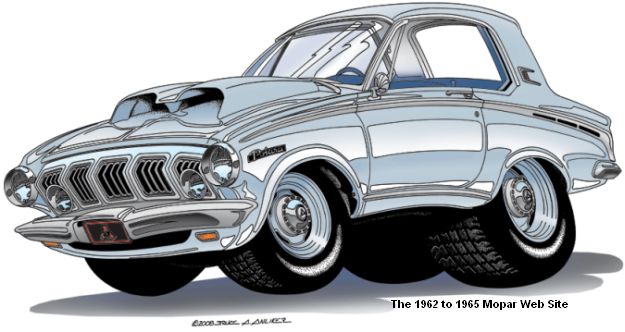 The Mopar has been a show winner at almost every show it has been to. In July 2008 the highest honor was awarded to me at the Carlisle All-Chrysler Nationals, former Ramchargers driver and record setter Mike Buckel chose my Dodge as his personal celebrity pick of the 2000+ cars at the show. This is the ultimate prize I could ever hope to win with this Mopar as Mike actually DROVE these cars up the 1320 during the factory Super Stock wars in the 60´s.

See Videos of the Dodge.

Quite the sleeper — until the motor starts!