August 2016 Mopar of the Month

I had the gas tank redone at Gas Tank Renu outside of Houston, and the power steering unit rebuilt by Lars up in Minnesota. I also decided on tubular A arms, and put all new parts in the front end.  At the same time I put on disc brakes up front from Stainless Steel Brakes Corporation (SSBC).

I bought a 392 Hemi in about 2004, which had a dual quad intake with number sequential four barrel carburetors and had it all rebuilt for this project. I was putting it in and found out that the motor would not fit with power steering and disc brakes. At a seminar at the Carlisle All-Chrysler Nationals in Carlisle PA I had heard Herb McCandless state how easy it was to swap in a 5.7 Hemi into his 1962 Chrysler. So I sold the 392 motor on Craigslist to a man in Tulsa and bought a 2008 5.7 Hemi. The problem was I did not hear Herb say to get a 2007 and earlier motor for project cars. He had put a carburetor on his, and I found out that I could not use carburetors on a 2008 or newer motor. The wires for the electronic fuel injection (EFI) on this 2008 motor were cut and I was not sure about the EFI computer matching so I had wanted to go with carburetors also on the 2008, but there are no available intake manifolds for them. So I bought a 2004 5.7 Hemi out of the Corpus Christi, Texas area that was still connected to the EFI computer, which allowed me to use the EFI. (I eventually sold the 2008 motor for just over half what I originally paid for it.) 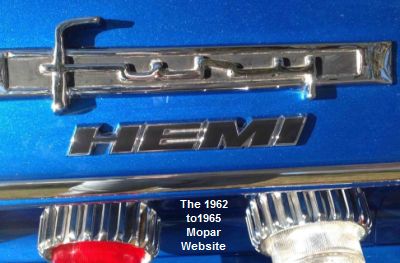 I had some trouble putting in the 5.7 because the original power steering sat up too high.  So after a few months I found where Borgson sells units that will work on the 5.7 Hemi, and even larger motors for Mopar adaptor bolts.  So back to the body shop for more fabrication so it would all get low enough to fit below the hood. In making it lower, the oil filter would not fit because the motor had been dropped and the filter was against the K-member. So had to install a remote oil filter on the inner-fender wall.

Earlier in 2014, I attempted to fire the Hemi, and got nowhere. An acquaintance of mine in Pennsylvania, along with my brother-in-law in California (retired Dodge mechanic) have educated me and sent me just about everything I asked in an attempt to get the motor to fire. In the testing process, using starer fluid, and with their assistance, it came down to all 8 fuel injectors being bad.  I have learned more about the EFI boxes and wiring and testing than I ever thought possible, or I ever wanted to know!

In time I realized the fuse box would not handle all the electronics for an EFI system, so I purchased a Ron Francis Mopar wiring kit. It works all right for the lights and had connections that worked on the EFI. Along the way I attempted to get a new aluminum radiator from a couple of distributors, but for some reason they did not want to do business with me, as they would not call me back, so I got a Wizard unit with duel fans.  With the Ron Francis wiring I needed to purchase an additional circuit board for the fans, and wire them up.

Along the way I also had to purchase a parts car, which was a godsend, because so many little things were missing. The parts car was in too bad a shape to restore, but the interior supplied quite a but of parts. I had all the stainless done by a guy, now retired, who was from Live Oak, TX and had a little business in his backyard; he did a very good job. He also introduced me to his neighbor, Jerry of Jerry's Upholstery, that did upholstery in his garage, and I really liked his work. So eventually I gave him my seats and the dash pads to cover in a light blue suede. The seats are done in a gray tweed with the suede trim and white roping. He did a great job.

I sure wish getting chrome redone was not so expensive! I used about 3 different businesses, and none of them did a very good job. I did get the bumpers done by a man and his son that do the prep and polishing but Alamo Plating houses the actual chemicals for the job, but they do not like the prep, especially on the small automotive stuff.

The folks that put in the exhaust were used to doing modern cars and made no attempt to use the existing hangers, so that was a boondoggle, which had to be corrected. Although it was my fault for not putting in a cross piece between the two exhaust pipes or the O2 sensor on the drivers side, that was a second correction, that is not common with carbureted cars.

There was loads of testing and trials. A short here, alignment there, cooling problems and radiator burping problems (I should have at least let the motor have some water and attempted to flush the dirt out of it prior to installation), put the seats in, take them out, remove the leaking heater core (which was new when I started), the radiator fans from Wizard were puller not pusher, and the long list of trials and tribulations continue. I apparently did not get the cable tight for the emergency door opener, and when I pulled it the thing came loose, so still have to take the door panels off again. And don’t forget the fuel pump. I did not know it either had to be inside the tank or as close as possible to it. Took a while, again trial and error, to get the right pump.

Getting the 1962 Plymouth completed in 2015 was a soft target. It is on the road but debugging will probably take another year to get it worthy of a trip.  This is not a race, it is a hobby, and as I would like to spend a few hours each day on it, sometimes, that is just not possible. Not that I would not like to be cruising to a Plymouth Owner's Club event, or Cruisin the Coast in the future. All in good time. 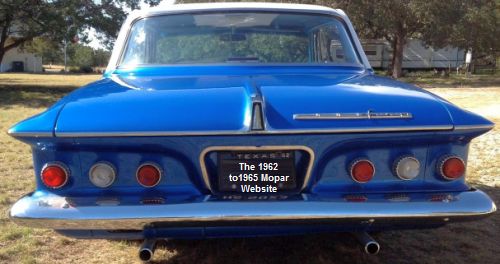