Scott writes:If you can believe it, this Chrysler 300 four door sedan is a barn find from three hours north of Montreal, Canada; the Mopar was in good shape but needed a lot of work to get to this point.

The Chrysler still has the OEM paint, maroon interior and white headliner. The Mopar has a 383 engine, three speed TorqueFlite non-pushbutton cable shift (1965 only) transmission, 8.75 rear with a SureGrip. (I have multiple gear sets I install for the purpose of driving style I intend to do.)

The Chrysler is 1 of 2187 ever made; the rest of them have been in demolition derbys from what I hear, or crushed! The platform is known as a C28 body style and as of Spring, 2015 I have only seen one other car the same from across Canada. I have seen every other 1965 Chrysler 300 non-letter car model, but very few with the complete chrome package on the doors and door beam, and Chrysler-lettered chrome moldings front and rear. The car sports front and rear bench seats.

This Chrysler is a pleasure to drive, with a modified 383 and transmission; the original powertrain is safe at home in the garage.

Technical Notes: The modified 383 has a 484 lift cam with 284 duration, nothing crazy but good torque, and a 10.0:1 compression ratio, topped with a set of mildly ported 906 heads, 3 angle valve job with springs capable of 550 lift and 375 pounds of pressure open. Dual exhaust with H-pipe and turbo mufflers with 2.5 tubes front to rear help exit the spent fuel. The TorqueFlite I built a few years ago and it is fitted with a shift kit and small convertor and BIG transmission cooler. Out back we run the stock 3.23 gears most of the time, but have 5 different gear set up to pick and choose what we want to do, highway, city, drag, all round. The axles are fitted with Mopar green bearings and the disc brake set up is from Scarebird Classic Brakes.

People see this Chrysler coming down the highway and it is a show at 60MPH, with the husband telling the wife to "get the heck out of the way, fast."

At just about every car show, people come up and say "my farther had one" or "my uncle had one and would pile 6-8 kids in the car and go, with no seat belts." (The Chrysler has seat belts now, as it did not come from the factory with rear belts, or emergency flashers.) 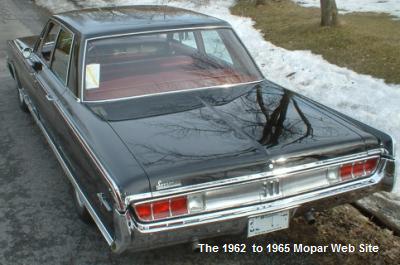 I am trying to find any NOS parts for this to make the Chrysler the best I can before I HAVE to paint it completely. Contact me if you can help.