Chuck writes from California: My 1963 Dodge 330, an original rust-free California car, was treated to a professional rotisserie restoration by The Street Rod Factory in San Marcos, California. The entire car was bead blasted and block sanded down to metal: undercarriage, floors, roof and trunk. The undercarriage was undercoated with 3M Dynatron 544 Dyna-Pro® paintable rubberized undercoating. Then 2006 Ditzler PPG Dodge Viper red was applied. Along the way, all bright work, windows, as well as every single piece of chrome or aluminum was replaced with NOS stock parts.

The Hemi is kept cool with a Griffin HP Series four core aluminum radiator with integrated Walker fan and shroud assembly. We live in the desert where temperatures routinely reach into the 100’s and the temperature gauge, even in heavy traffic, never gets above 170 degrees.

Not a trailer queen, the Dodge was built specifically to drive on pump gas with no additives; the Mopar rides and steers like a new car.

The Dodge has won numerous awards since the restoration: so many local and regional Best of Show awards in fact that when we go to local shows we write no trophy when we register the Mopar. Below is a short sample list:

One memorable time I drove the 1963 to the Grand National Roadster Show in Pomona CA. Our club, Inland Mopars, wanted to have the 330 inside in the club's space. We were in line waiting to go in and a buddy of ours who had one there with many of his cars told us that we should have considered towing the Dodge and having the car professionally detailed, including the undercarriage: there was no way we would win at this show.... After seeing the competition at the show there my wife Linda and I agreed. We were so certain we would not win that we ended up not going to the awards ceremony. Surprise! One of the guys in the Inland Mopars club phoned and asked are you in the auditorium? You just won Best Street Machine Custom 1949-1964!.

As you can tell, we take the 1963 to many car shows and we have had a lot of fun with the 330 at the shows. The Dodge is not common to find at these events, though, and even avid Mopar fans are unfamiliar with the early 1960s B-body cars. Is that a Polara? and what is a 330? are common questions. Also, there are always questions about the horsepower numbers, what year the Hemi engine is and if the 1963 ever raced. 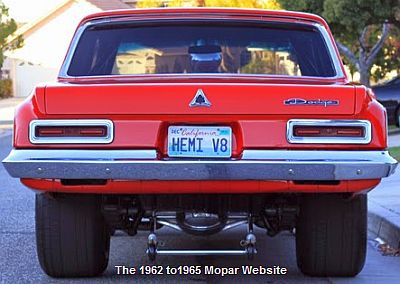 Also frequently questioned is the streetability of the Dodge. One year we drove the Dodge to the Doctor George Show in Palm Springs, CA. We parked the Mopar and the show started. The following day so many people said nice car, but you can’t drive it anywhere. They were shocked to hear that we had driven the 330 to the show and more shocked when told that the Dodge gets around 11 miles per gallon on the freeway!