We picked this Mopar up in August 2006. My wife had decided that she wanted a big block, convertible, 4 speed, Plymouth Road Runner...to which I responded “you don’t want much, do you!” So we started looking around and rapidly discovered that prices approaching anything close to this combination were sky high, as we all know. So I started looking into the mid 60’s Mopars which I had always liked. We saw this Dodge in the car corral at the 2006 Chryslers at Carlisle and didn’t even realize it. I was looking around on the Internet after the show and spotted this one for sale at a resto shop in West Chester, PA, at Connors Motorcar Company.

The price was low, a deal was struck, and we took her home. This was our first drop top and we LOVED it! We put over 150 miles on the Dodge the first weekend...all top down of course! 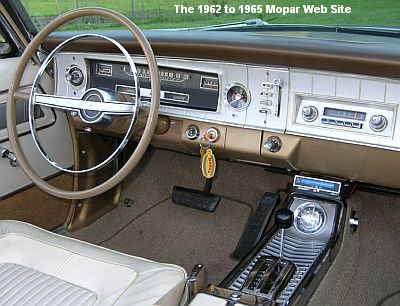 The Coronet 500 came from Hopkins Motor Sales in Minneapolis, MN. It was bought new by the grandmother of the previous owner (so we are the 2nd family of owners), was apparently garage kept all it's life, and had 78,001 miles on the odometer when we took ownership. The old lady gave it to her granddaughter who basically didn’t care about the car and sold it two years later. But before she did, she had the above mentioned resto shop put ~$3000 worth of maintenance work into it (hoses, bearings, brakes, rebuild the carburetor, tires, exhaust, etc.) and then sold it to him. 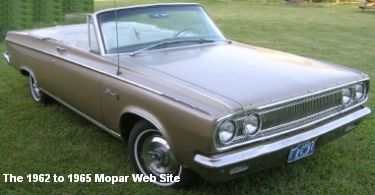 Unfortunately while she had the car it sat outside and that seems to have provided the only rust in the car: the center trunk pan.

Supposedly one of 1,403, this Dodge has a 318 Polysphere V-8, 727 automatic, floor shift console, 2.93 open 8 3/4 rear, and was unbelievably complete and original when purchased. It’s been painted once (which it needs again), had the top replaced, new carpet (due to a leaky heater core), and recently replaced rear springs. The original leaf springs still had the canvas rub plates in in the leaf ends when I removed them! The car has no cowl rust, and no body rust except for the center trunk pan, as mentioned previously. The old lady did park by feel a few times so some of the chrome has been bumped and nudged, but surprisingly, every piece of chrome and trim are still there...not one thing missing!

We are driving the Dodge every chance we get right now, with plans to re-paint the car and restore the trim in the semi-near future. I’m going to be putting a factory 4-bbl setup on it soon and am starting to think about possible big-block plant in the future, but I’m not sure yet.

That’s about it. I want to give Gary H. a big thanks for letting my 500 be the Mopar of the Month, and I want to thank everyone on the 1962 to 1965 Mopar Mail List Clubhouse for all their help since I’ve become a member of this site...you’ve been a HUGE help!!!

Having fun is what these Mopars are all about, as you have discovered.