Mopar Daddy has posted about his home grown 1964 AF/X:

Remove all body panels that you can; doors, hood, bumpers, trunk, etc. Remove all interior peices. 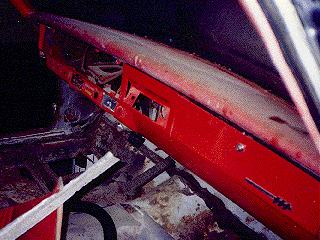 Level the chassis using 8 jack stands. Measure and move front K member 10 inches forward. The top of frame will have to be measured and set at the same degree as the original. 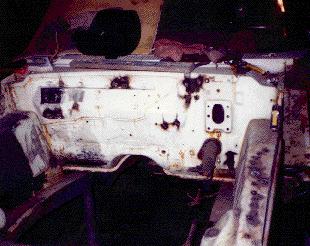 The rear axle of the car has been moved forward fifteen inches, just like on the factory cars. This procedure is really not all that complicated. It involves slicing the floorpan just behind where the front seats are located. Cuts are then made at the rocker panels and again in the trunk, just behind the frame kickup. Then a rectangular section is removed from the floorpan which must equal the amount thatthe rear wheels are to be moved forward. Then, the section of floorpan/frame containing the axle clearance frame kick-up is simply moved forward and re-welded into position. Filler panels are welded down to fill any voids left by the surgery. 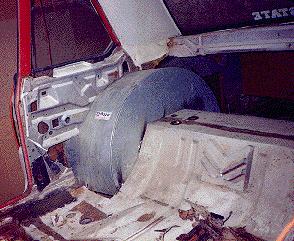 As for the bodywork, the rear wheel openings can be cut out and grafted into position so that they center around the relocated wheels, or as was the practice among some of the less appearance-concious teams, the wheel openings can simply be elongated, thereby eliminating most of the cosmetic body work. 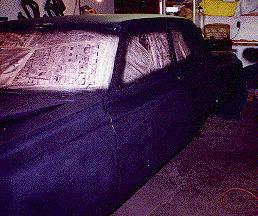 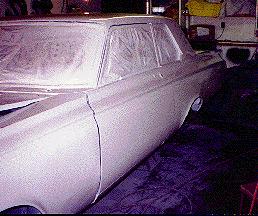 When cutting the old wheel wells out there is a hidden brace behind and above the wheel well.

Use the F-body disk brakes. Spindels, rotor, caliper it is a bolt in deal. If you use 14 inch wheels use the 11 inch rotors with the sliding caliper. Use the 11 1/2 inch rotor when using the 15 inch wheels. When you sut teh rear frame tack weld a piece of angle iron to the rear bottom of the two frames.

After you have stripped your car remove all under coating. This will make rewelding much easier. And sand blast the front end of the car. Firewall, frame rails, and inner panels.

This year I replaced the rear frame rails, installed new ss springs, new shocks, a 4500 stall converter, 2 inch fenderwell headers by Hooker, a tm7 intake, and 1050 Demon carb. We will see what it will run when the track opens! 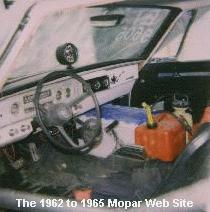 I hope to be at the Mopar Nationals in August.

Visit Mopar Daddy's Web Site to see many more pictures of this project!