Bob writes from New York: Love them or hate them — and the latter was the usual response when these cars debuted — the 1962 Plymouth Fury and its Dodge Dart sibling are historically significant to say the least. Both were dramatically downsized on a false rumor that Chevy would be shrinking its midsized Biscayne/Impala for the 1962 model year.

In fact, what Chrysler's president thought he overheard one summer day in 1959 concerned the upcoming compact Chevy II, not the midsized models. But by the time the Mopar folks got the story straight, the new "B-body" was well underway, having lost 3 inches of wheelbase and some 300 pounds compared with earlier midsized Mopars. And while design chief Virgil Exner's bold, asymmetrical styling cues hark to his striking XNR showcar (at last year's Sunday In The Park) and get "thumbs-ups" today, most contemporary buyers thought the 1962s were just plain weird. Few sold, and Exner, who had taken Chrysler out of the styling dark ages only a few years before, was summarily fired.

Today, the 1962 Fury and its Plymouth and Dodge brandmates are a rare and highly collectible reminder of early 1960s space-age design, from their clamshell front fenders, grille-encased high beams, and v-shaped windshields to their wrap-around rear windows and jet-trail taillights.

I have owned the Fury since 2012. After purchasing the Mopar, I finished what we will call a sympathetic restoration of what the Canadian owner had mostly completed.

A partial inventory of what I did: new bumpers, a Griffin radiator, an original four-barrel manifold for the poly 318 ($325 on ebay), new headliner in original-style fabric to replace the mouse fur the last owner installed, front-suspension rebuild (Firm Feel), rebuilt steering box and pump (Steer And Gear), front/rear anti-sway bars (BIG improvement), and urethane motor/trans mounts (Schumacher Creative Services), along with a refurbished steering wheel (from Charlie Quarters in Michigan) and new white paint — actually a Mercedes "Polar Weiss" that matched the shade they had sprayed it in Canada, albeit without the metal flake they had added.

"Less dead weight, more live action" was the ad slogan of the time, and it's true: these lightweight Plymouths were unbeatable at the dragstrip when equipped with that year's Max Wedge 413, and mine is a brisk performer even with the 318 and 2.76:1 highway gears.

I have loved the 1962 B-bodies ever since my grandfather bought his 1962 Dart when I was in kindergarten. Driving the Plymouth brings back a rush of happy memories, as the Fury shares its color combination and — being Canadian — its Dodge dash and interior with my grandfather's 1962 Dodge Dart.

My Plymouth never fails to get a thumbs-up and a crowd at shows and elsewhere--a happy contrast to when these cars were new and almost universally reviled for their "weird" styling. The Fury also runs strong, does not burn oil, and manages 14 to 16 mpg, even if I stand on the accelerator pedal. Perhaps poor Mr. Exner was just too far ahead of his time.

As a sidenote, notice the rear Turnbull Motors trunk emblem — a long-defunt Edmonton, Alberta, Mopar dealer from which this car was originally bought. In fact, I have the original bill of sale with the Turnbull letterhead. 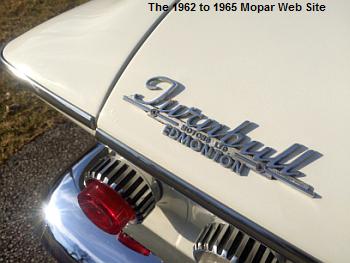 When I bought the Plymouth this emblem was missing, but the two holes it originally screwed into were there beneath a plastic Plymouth emblem that had been cribbed from an 1980s-era Horizon. Believe it or not, it took just two calls to the Edmonton area to unearth two of these trunk emblems, which of course fit the two holes precisely! (I had indeed noticed the clear outline of where the Turnbull badge had been before I repainted the car.) So I mounted one back to where it belonged and kept the other as a spare, as my odds of finding more of these are next to nil. 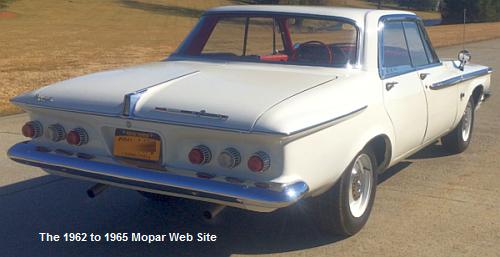 December 2016 note: Nick, the new owner, has put this Plymouth up for sale. His ad:
For sale SOLD: 1962 Plymouth Fury 4 Door Hardtop, car # 21 of 327 produced in Canada, and one of the few if any hardtop survivors. This Canadian built Fury was produced with the Dodge 440 interior. I have over 100 photos of restoration work and receipts for well over 38K. The car was painted in 2014 Mercedes Polar White. All the front end suspension has been replaced new brakes, dual master cylinder and new tires. The original engine has been replaced with a 1967 318 Poly, upgraded with a 4bbl Power Pack manifold and fitted with an Edelbrock 500 cfm manual choke carb. Rebuilt transmission, a new dual exhaust with Flowmaster mufflers, new Griffin aluminum radiator makes this car run cool on the hottest day. For the cold the heater core and control valve have just been rebuilt. New carpet, headliner, steering wheel, rechromed bumpers, all brightwork trim in great shape, and much more. This is a great cruiser and starter car for someone wanting to enter into the hobby, multiple show winner. Asking $14,000. [SOLD! October 2017]