February 2016 Mopar of the Month

Ken writes from Texas: I have always found the styling of the 1964 to 1965 A-body Dodge Darts attractive. I kept my eye out for a pushbutton TorqueFlite V8 convertible example because I liked the idea of top-down driving and the probable appreciation of the convertible, as well as the crowd appeal of a convertible.

In 1995 I found this 1964 Dart GT in Oklahoma via an advertisement in Mopar Collectors Guide. The Mopar was not numbers-matching but was in decent shape and priced fairly.

After I had the Dart GT a while, I decided to do some restoration. When the original red paint was stripped it was obvious that several areas needed straightening out before the new Viper Red paint was sprayed. One thing lead to another, resulting in a "ground up" restoration over 7 years. Other modifications included converting the 273 cubic inch engine to have a four barrel carburetor, adding dual exhausts and converting the original 13 inch wheels to 14 inch on Cragers. 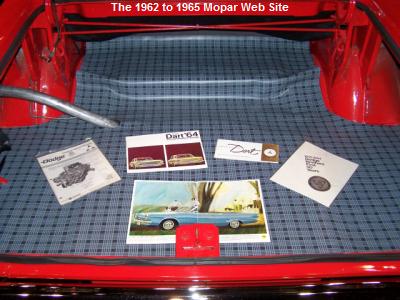 The Dart GT, we call her Raggedy Ann - The Little Dodge Rag Top, is fun to drive and has won many car show awards.