November 2017 Mopar of the Month

My brother also bought a 1964 Plymouth Fury about a month later and it was a convertible. Having always liked his 'vert I started looking for one later in life, when I could afford it. Around 1996, I saw an advertisement for a 1964 Plymouth convertible that was in the process of restoration but the man doing the work faced bad times and needed cash. Consequentially, the wife and I flew off to New Mexico to look at the convertible and buy the car if we liked what we saw. The Mopar was rough but all there. So I made him and offer and he took it. I made arrangements to have the Plymouth shipped to Pennsylvania upon completion of the deal.

This 1964 Plymouth Sport Fury was a Texas car that had ended up in the oil fields and used as a gang car to take oil wranglers to the wells. The man I bought the car from had rebuilt the front end and had started to paint it with rattle cans. The original engine was gone and he had a 1968 383 HP engine under the hood.

Subsequently, I tore the whole car down from bumper to bumper, removing every nut and bolt I could get off. The previous owner had several boxes of parts that I would have to put back on after the painting was done. Lucky for me, I already had bought another 1964 Plymouth Sport Fury five years prior; it was a barn find in North Dakota. I restored that Plymouth so I had a car to find out where the parts went!

After three years of labor and love and the Plymouth fired up. The Flowmasters sounded great with the large exhaust pipes. The Mopar runs great and is pretty peppy. 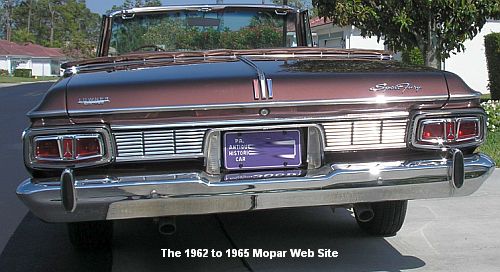 Only thing I do not like is the Detroit locker rear that the prior owner put in. I would swap someone for a 3:23 limited slip.

By the way, as of now this Plymouth is for sale if anyone is interested for a fair price with lots of extra 1964 parts, many NOS.