November 2013 Mopar of the Month


I bought my Dodge from the original owners in September 2001 from Kelowna British Columbia with 129,000 miles. The car was bought for the mother of the family and was a regular grocery getter for many years until the mother died and the children drove the car for a while until it got retired to the back yard.

I saw the Dodge while driving with my father-in-law and only saw the roof line. I stopped and looked at the car from the street but since I had never seen or heard of a 440 before, I had no idea what it was except it was a Dodge from 1964.

Many conversations with the family and consultations with Bill Watson (Chryco guru) got the car into my possession.

It took 4 years to complete the restoration and when I was done in July 2005, I sent photos to the daughter to show her the Dodge. She was shocked. She told me that she started to cry because there was her Mother’s car just the way she remembered it when the car first came home. That made me rather proud of what I had accomplished.

Since restoration I have had the Mopar to many car shows and cruises and it is a real treat to drive and it is always pleasant to get a “thumbs up” from people seeing the car. Even though it is not “perfect” it is a good feeling to have people think so.

My first trip with the 440 was to Moparfest 2005 and my daughter Tina and I drove the car 20 hours each way. There was rain for 16 hours of the 20 on the way down and the one speed wipers did their job wonderfully.

In fact, my Dodge was “Mopar of the Month” in September of that year.

Skipping a few years and many car shows, I drove the Dodge down to Moparfest 2010 and entered the car beside Doug Baker [Open link to view 2004 photo,left to right: Kevin Merkley, daughter Tina Merkley, and Doug Baker, in front of his red 1963 Plymouth] and Bill Watson in the show. The car was as clean as it ever was and the weather was perfect for the weekend. On the drive home, the adventure started....


At approximately 8:30 in the morning, 35 miles north of Sault Ste. Marie Ontario, I was driving the 440 on the highway at about 60 miles per hour and as I reached the top of a hill, a cow moose and her two calves decided to cross the highway in front of me.

There was not much room or time to do much so in the nano second I had to decide what to do, I chose to swerve to the far left of the road in order to stay in front of them (they were crossing from the right to the left). That meant that I was in the oncoming traffic lane until I could get to the gravel shoulder of the highway. Fortunately, there was no oncoming traffic to face!

From the nano second I had to decide until after the impact, I do not remember anything except staring straight ahead to keep the car on the gravel shoulder and not hit anyone coming at me or dropping off the shoulder and rolling the car in the ditch. I felt that the Moose/440 impact was inevitable and all I could do was hang on.

After the impact, I stopped the Dodge. I had the car almost stopped anyway but I went another 50 feet or so before pulling down on the park lever and getting out. Remember that the car was just in a car show and was as clean as I could get it.

Before I got out of the car, I saw that one moose was at the bush on the left, one was almost at the bush and one was getting up from the middle of the highway.

I got out of the Dodge and walked around to the passenger side to see what I was going to have to fix. Just as I got around the car and started investigating the damage the fellow that was following me asked if I was alright. I told him “I am fine and look how RAM tough the 1964 Dodge is.”. He said good-bye and left me on the highway with my car. I was still 350 miles from home.

At first it looked like there was no damage at all although the car was covered with mud and moose hair. I took some photos and got back in the car to call home. At that point I was shaking so bad I could hardly dial the phone. That was a very close call!

Most collisions with moose are fatal to the people in the vehicle and sometimes to the moose because the moose is taller than a horse. Usually the car slides under the moose and the moose gets knocked off its feet and slides up the hood and their body takes off the roof and flattens the passenger compartment. Knowing what I just wrote caused the shaking.

I started up the 318 and drove the Mopar home. While on the drive I had plenty of time to think. What I did not understand was what happened. I was looking straight ahead and then my car was hit and there were the 3 moose. Which one hit the car? Did more than one hit the car? The only person that would know was the fellow that stopped to ask if I was okay. He was at least 30 minutes ahead and could have turned off the highway at any time.

Some folks think I’m lucky. I don’t know but after driving about four hours, I saw the witness ahead of me on the highway. I followed him for another 2 hours before he stopped for fuel. When I pulled in behind him, I got out and asked him if he was the fellow behind me that witnessed my Moose collision. He admitted that he was. Now to get answers.

I told him that for the last 6 hours I have been trying to figure out what happened and there are too many unknowns. He described the situation like this: He was content to follow me on the highway and was not really paying attention to anything except following my tail lights. All of a sudden my brake lights came on and my car went fully over to the wrong side of the road. It was then he saw the 3 moose in the middle of the road crossing from right to left.

The cow continued straight at the car until just before the car got stopped and then turned to the right (same direction as I was traveling) and hip checked the car. The car then dragged all along her until clear of her and she then walked to the bush to meet the calf waiting.

When I inspected the Dodge after washing it at home, there was a lot of moose hair caught between the trim and the body, the clear coat was scuffed on the ridge above the trim, there was a big dent in the passenger door and some minor damage on the rear of the front fender due to the impact of the moose.

I drove the Dodge for 2 years without fixing any of the damage except getting the hair out of the trim and the repair cost was $250.

I was lucky and pleased to have been driving The Moosinator. Of course, the story would have been different (if I was even able to tell it) if I had been slower and hit the moose with the front of the car.

Regardless, not many can tell about their Mopar hitting a moose and then driving 350 miles home. 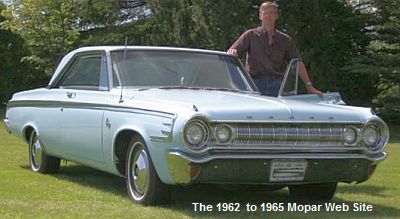 Holy Bullwinkle! Great story, with a happy ending. No carnage and the 1964 Dodge 440 rolls on!