RE: The Shock Treatment story

I grew up in the Chicago area and raced 64 Plymouths and Dodge back in 1964. In 1976 I moved my family to "Silicon Valley" California when the Fremont Dragstrip (remember Beach Blanket Bingo) was still operational, and I started visiting the drags again.

By 1995, I had enough "watching" so I decided to do it one more time. Call it a mid life crisis if you want, but always being a Mopar man, I found an original 1964 Plymouth Belvedere that was already well on it's way to becoming a reasonable drag car. It had a built 440, 727 with a brake, roll cage, etc. and ran high tens. It had leaf springs, but the price was right, and this was a perfect way to get back into the sport. I call this my old red 440. I always wanted to run a HEMI again but I figured a nice reliable 440 was the better (and cheaper) way to get back in the groove. The 440 ran well and won me a few races. After a year or so I decided to start construction of what I called the Silicon Valley HEMI. (The Silicon Valley HEMI was the January 1999 Mopar of the Month.)

I had always assumed that I'd sell the old 440 and switch over to the HEMI. Ironically enough, just the opposite has occurred. People find this a little hard to believe, but while HEMIs are always cool, it's actually a little boring to drive. Magnumforce did such a great job building a very straight chassis, that the HEMI just sits back and goes without much fanfare. The old 440 however, due to its weight (3500 lbs), higher center of gravity, much lower first gear, and lower rear gearing, lifts up the wheels, bounces a little at the shift and is just - how do I put it - a ball to drive.

Nevertheless I still figured I'd be selling the old 440. Then my niece Susanne Hovis came out from Chicago for a visit. She made it clear that she really wanted to drive a drag race Mopar. She drove the 440, handled the car well, and cut good lights (.508 on her first try). So she decided it was time for her and her husband to move to California. Next thing I know, she's living down the street and wants to do some Mopar drag racing.

The 440 was showing the signs of 250+ trans-brake launches and the 727 started to leak. It looked like I was going to keep the car. I figured it was a good time to "freshen things up". Well, what started out as a "freshening" turned into something more akin to a total rebuild. The 727 went to my friends at TCI and I shipped the 440 to Koffel's Place that I've heard many good things about and they found cracked heads, too small a piston to valve clearance, a very tired valve train, etc. So Koffel's used as many parts from the 440 as they could, and built me a B1 "Bracket Bomber". Koffel's likes to use a 400 block (my old 440 block was already at max bore) with a 440 crank, J&E pistons and, of course, B1-BS heads. The 471 cubic inch result is an engine that not only looks pretty good, but it also puts out almost as much horsepower as my HEMI - namely over 750 HP at over 650 ft/lbs of torque. Back this engine up with a 5500 stall converter, the low first gear of the 727 and a 4.88 Dana in the rear, and you have a car that's really a lot of fun to drive.

Not being sure of exactly what my old 440's horsepower was, and sensing the new Koffel's motor would put me in the nines, I figured it was time beef up the suspension, and perhaps take some weight off the front end. It already lifted the front end so Magnumforce installed a pair of stress relieving wheelie bars. To stabilize Susanne's launches, Ron also suggested throwing out the leaf springs and going with a set of ladder bars, which of course he built, and a pair of dual adjustable coil over shocks from Aldan. I always disliked the old Chrysler K-Member and torsion bar setup. Ron Jenkins (Magnumforce) showed me a new chromoly, bolt in, K-Member replacement that used rack and pinion steering that he was about to bring to the market. This piece matched up with his tubular upper and lower control arms seemed like a message from Heaven. You wouldn't believe the weight and space that combo saves. Along with discarding the heavy steel K-Member goes the torsion bars, steering box, ties rods and everything related. And there's a secondary benefit - the rack and pinion steering mounts up front so there's no more hole through the oil pan for the steering tie rod. Now I can get the pan off the motor while it's in the car without having to dismember the beast. My guess is, I tossed between 100 and 200 pounds in the trash. My 3700 pound 440 was turning into a 3500 pound B1 bracket bomber thanks to Koffel's and Magnumforce.

Now to the paint scheme. The old red paint was - well - red ... but that's about all I could say about it. I went back to Prestige Auto Body who did the SV HEMI and they suggested a new PPG Harlequin paint that changes color depending on how you view it. This is trick stuff! The car is gold, purple, copper, yellow, or whatever, depending on where you stand. 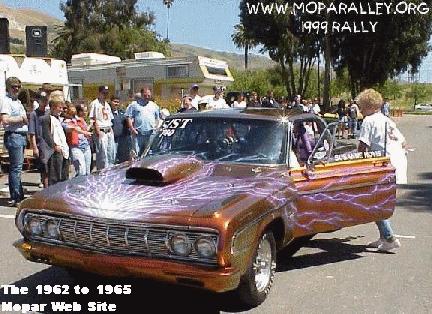 Then Josh Stokes did his thing with his air brush again (he did the circuit board on the SV HEMI too). I had already painted the tow trailer and the Koffel's motor purple, so to stay with the purple theme I mentioned to Josh that if lightning struck the front of the hood the lightning bolts have a purple corona around them? I left him alone for a few days (he probably looked up the word "Corona") and the next thing I saw was the result you see here. He wrapped the lightning over the dash (no he didn't ask), and continued into the engine compartment. The purple corona "works". Susanne came up with the name "Shock Treatment" since, for many people, that's just what it is.

First time out it runs a 9.92 at 133 MPH. This was with high pressure in the slicks, 3 degrees retarded timing, rich jetting, and the wheelie bars set pretty low. Since then we've run a best of 9.52 at 138. Susanne is licensed to run in Super Street which uses a 10.90 index. Trying to slow the car down to run 10.90 was more difficult that you would think. We actually had to modify the throttle stop to close the plates more. I guess this is the kind of problem you like to have, but it's weird for me.

It's a race car, not a show car, but it has taken a first place trophy at every show it's been in so far, starting with the famous Spring Fling in Van Nuys California. So one of the biggest problems is the process of racing it - then cleaning it - then showing it - then racing again - etc. 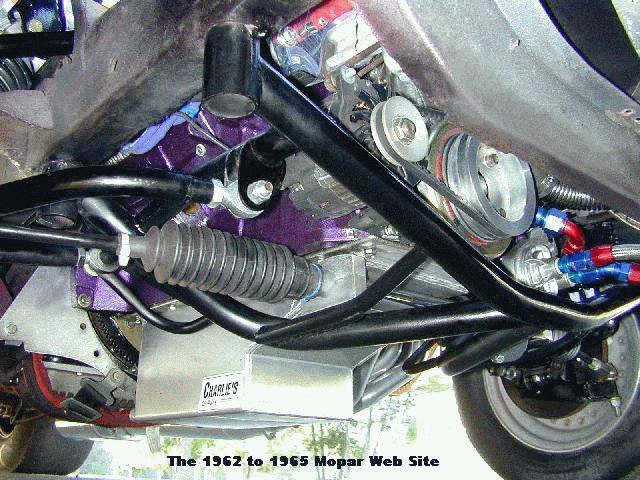 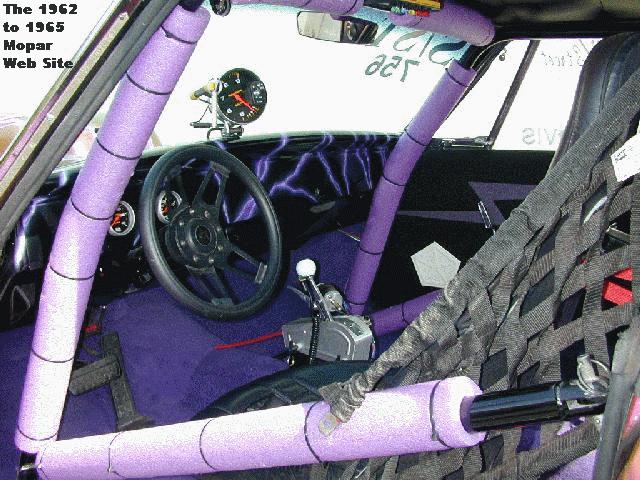 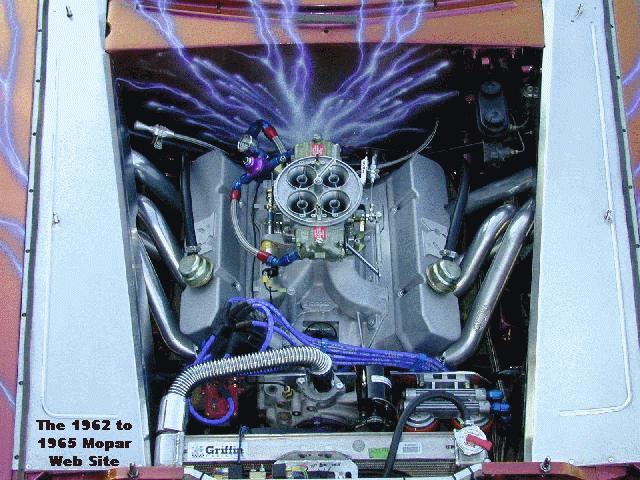 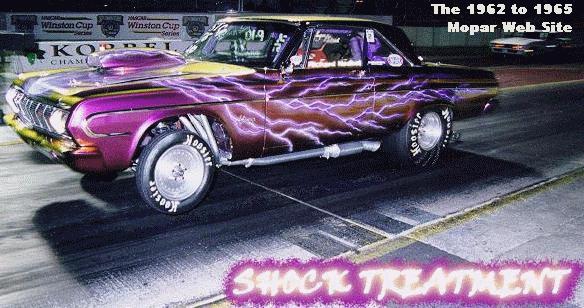 
Well, Rich, you're the first guy to post two Mopar of the Month Mopars!

Your neice is a very intelligent and savvy woman to see the value of that 1964!