October 2014 Mopar of the Month

George writes: I bought my Dodge in August 1991 for $500.00 and drove it home. The Mopar had an oil-burning Poly 318 engine and the TorqueFlite transmission. The first thing was rebuilding everything underneath: rear end to front end. But the Mopar sat for eight years while I was raising children, then a divorce.

I went with a 1972 motor home 413 when the first engine got four cracks in it. The 413 was bored out .060, standard pistons; it runs around 9.2 compression. The engine has a 440 6 pack cam, single plane Mopar intake and 750 Edelbrock, Max Wedge manifolds and a custom-built Max Wedge exhaust by a Mopar-run exhaust shop. A Centerforce II clutch is in front of a 1968 A-833 4-speed transmission. The Dodge has the 11.75 discs on for better stopping, with Volare spindles,and pin calipers. The body work was done by a Mopar guy in his shop over one year. A big thanks to Rich Kinsley for swapping and then helping put the 3:54 Dana in and also dropping the engine in without scratching any paint! I could not have done that without him.
View the Work in Progress sample restoration photos.

I enjoy driving the Dodge!

Eventually my one year old granddaughter gets the car. That way, I’ll be gone if anything ever happens to the Mopar.

I used to keep receipts, but finally just chucked them. I didn’t want my ex to know. More importantly, as you guys well know, you can’t put a price on a dream. 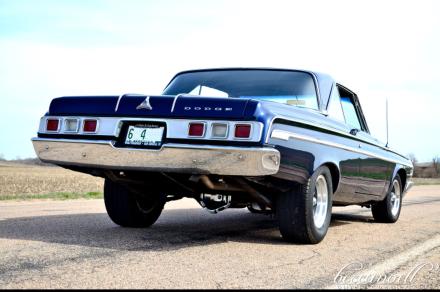 Thanks to professional photographer Becca Ford at beccanoell photography in Omaha, Nebraska for the photos and providing permission to display them on this web page. Contact:

Thanks George! All your hard work paid off well. You are livin’ the dream!